Below you'll find beautiful LULLABIES that instill positive messages. There are also songs and musical fairytales of virtue that help develop children's CONFIDENCE, SELF-WORTH and IMAGINATION.
Dear Mothers, Children and All Who LOVE Them,
As a child, I loved when my mother sang songs to me that had beautiful melodies, emotional stories, and WISE meanings. Later, when I became a mother myself, I couldn't find many songs like that. I wanted to express MORE to my children than the messages in Rock-a-bye baby or Twinkle, Twinkle Little Star. The time when we can truly affect our children is getting SHORTER, and I wanted to fill those precious moments with lullabies that would affect them in POSITIVE ways; songs that would lead to self-acceptance and self-betterment, musical fairy tales of virtue, songs and lullabies that would inspire passion, and develop creativity. I wanted to expose children to songs that would make them feel, IMAGINE, think, and discover things for THEMSELVES. I knew that times before they fell asleep made them the most susceptible to learn and to RETAIN that knowledge. With these thoughts in mind, I created all the songs and lullabies below for my own children. Seeing the effects of these messages on my young ones, it became my dream to share these unique and inspirational lullabies with ALL the children and those who LOVE THEM.
—Liliana
“The most beautiful, memorable lullabies, musical tales, and heartfelt mothering songs I’ve ever heard.”
–Sheila Ellison, national parenting expert and author.
​All downloadable songs are available on Amazon, CD Baby,  iTunes , or internet radios like Spotify, Apple Music, Jungo, etc. You can also order them directly from this secure site. All physical CDs -  FREE SHIPPING!
​THANK YOU for your support!

"Liliana always has a creative and unique way of teaching children."
—Bob Ralls, former President and CEO of Junior Blind of America
"I never try to teach children by lecturing them, instead I try to gently suggest and INSPIRE. Every so often, I would interweave an intriguing thought... and somehow, later I would find that they learned their lessons much more PROFOUNDLY. Why? It is their own reasoning, not mine, that makes them come to a "knowing state." I am absolutely convinced and passionate about developing creativity and imagination in children as EARLY as possible. It is so much more important than teaching a three year old the ABCs. Imagination then becomes a VITAL tool for solving problems, understanding and furthering science. Many of my lessons are interwoven within my SONGS and LULLABIES."
—Liliana Kohann 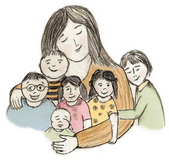 ​
The streams of Liliana's songs on internet radio, like Spotify and iTunes - Apple Music, keep growing. During the year 2016, one of the songs, Five Little Dinosaurs, (from the CD My Sweet Little Boys) became the most popular out of Liliana's songs for children, probably thanks to a little boy in Australia (or girl) who listened to this song 75 times in one day! (:-)
"One of the favorite songs of my own children was Five Little Dinosaurs, A Humorous Lullaby. I wrote this song and used it to teach my boys to have patience, acceptance and love for their little brother. We sang it together, we role-played it with puppets, we acted it out, and had a lot of fun with it. It is so nice to see other children enjoying this song now." —Liliana
​
Click below to listen to the entire song.

To go back to other music categories, click one of the links below.
Adult Contemporary
Spiritual
In Polish Language
To go to my site for Mothers and Children go to:
SongsAndLullabiesForChildren.com