Liliana Kohann is a writer, singer/songwriter, inspirational poet, filmmaker, and illustrator from Poland, residing in America since 1984. LilianaKohann.com is the official website of this award-winning artist. Liliana is also the creator of the online literary journal
​The HEALING POEMS. 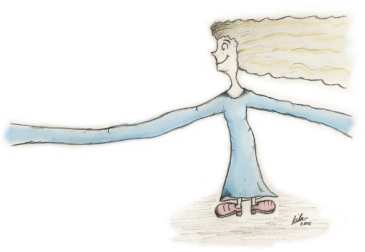 Liliana Kohann* grew up in the beautiful city of Gdansk, Poland, where she received her Masters Degree in Education. Under the terror of a communist regime, she was forced to experience life in a different, challenging, and interesting way.

Liliana was a strong-minded, intuitive and extremely creative child. Although popular among her peers, she was frequently reprimanded by her teachers and other authority figures  for drifting into her own imaginary world. Writing down, since early childhood, her inner dialogs, poems, songs and stories became a form of survival, an escape from the world she had to deal with, and, at the same time, a bridge to her own core of being. She would often intentionally create poems  to help others cope with similar issues. Witnessing early on the positive affect of her poetry, shaped her life-long mission of empowering individuals to improve themselves and the world around them.

By the time she was 19, she had written over 500 poems and short stories within the pages of her journals. She was beginning to be recognized, and awarded for her beautiful voice and unusually creative and inspirational songs and writings. After she took first place in a national competition for songwriters and performers, the Communist Authorities issued a statement that she would not be allowed to perform in the next competition, as her words were “too expressive.” This, and other unusual tragic life circumstances that were to follow, led her to America.

No matter what happened in her new life in America, she would always pick herself up and start over with even more determination. There was, however, one thing that she didn’t pick up for a long time, and that was her pen. It took her fifteen years before she would write again.

A number of years ago, as a single mother of three little boys, she began a search for the inner child she had left somewhere behind the Iron Curtain. And it was in that process that she resumed her writings. Her lyrics and poetry so cleverly interweave the depth and wisdom derived from her life. That wisdom, along with playfulness and great humor, makes her work irresistibly compelling, deeply enriching, and highly entertaining.
WHAT PEOPLE ARE SAYING ABOUT LILIANA'S WORK
“Not since the first time I heard Barbra have I been as touched and impressed by a singer and her music as I have been by Liliana.”
​— Marty Ehrlichman, discovered and managed Barbra Streisand.
"You must never stop singing!"
— Pope John Paul II
“Liliana’s style of writing (and drawing) is simple, direct and has a wonderful childlike quality, and yet the WISDOM contained within these poems is PROFOUND and psychologically sophisticated. I especially recall a day when Liliana was reciting one of her poems and the thought that kept running through my mind was that this was Dr. SEUSS for ADULTS! Lilting, fun, the mental pictures easily and quickly evoked by her poems seem to allow adults to listen with their 'guards down,' and the poems' messages therefore hit a deeper place in the listener's psyche."
— Linda Leftwitch, PhD
LILIANA SHARES ABOUT HERSELF
Along with being an entrepreneur and the sole provider for my family, I have many artistic passions. I write music for adults, lullabies for children, poetry, short stories, and I draw the characters that appear to me when I create a story or a poem. I also love making videos and films that entertain, remove burdens, and inspire positive changes in people's lives. I was advised before that I should narrow down the things I do to ONE or TWO. But I just can't limit myself. It's NOT me. Why would I paint a LESSER picture of who I am? And by "lesser" I don't mean lesser than my "great self," I mean lesser than my "true self," with my faults as well as my gifts. Why would I offer you a "lesser" gift than I have to offer? I finally gave myself the FREEDOM to be who I AM, and to SHARE what I HAVE TO SHARE. In other words, I chose to be faithful to my heart.
FOR THE FIRST TIME
Words never spoken
letters never sent
feelings not embraced
rules — never bent.

Today I stand alone
with my loneliness and fear
but for the first time
my own heart... I hear.

LILIANA KOHANN
©Artpeace Publishing  2006
Describe my work in one sentence? Hmm... I don't know what it will be for others but for me it is a journey into the creative powers of the subconscious mind. Imagine yourself standing on one side of an abyss in your realistic world, sometimes full of struggles, insecurities, loneliness or confusion. On the other side the world is unknown, the divine mystery, the subconscious, the fairy tale, or the dream. My work is a bridge between these two worlds. Ever since I had the courage to step on that bridge, my perspective has changed. My whole life has changed, and so did my art.​
"I have climbed many mountains, I have walked forbidden trails.
I spent youth fighting for freedom, middle age… in self-made jail.
I had days of joy and glory, yet, at times I lived in shame
but I’ve learned to live my own life, and now I can truly say
that I lived each day with passion, and if I didn’t…
​God, have mercy on my soul."
—A fragment of Liliana's song, "Passion"
©Artpeace Publishing 2008
GOALS AND PURPOSE
Other than the love for my family and friends, some of my strongest passions and gifts in life seek their fulfillment through the following goals:
​
1. Using CREATIVITY, DEPTH and HUMOR to originate positive changes in people's lives and my own.

5. CARING for and PROTECTING our environment for FUTURE generations.
* "Behind the night there is a light. What really is a shadow? Embrace them both: idleness, growth,
all blooms on your life's meadow."
A fragment of a song EMBRACE ​

Liliana and her three sons in Poland, by the Baltic Sea, Year 2009 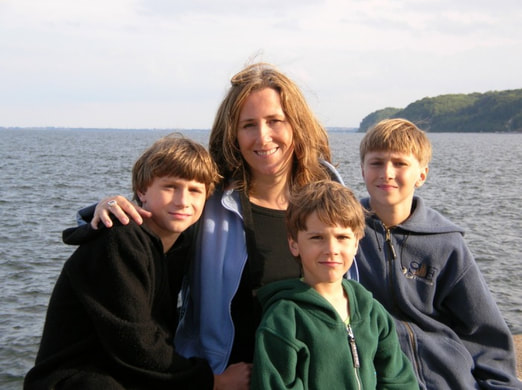 Liliana with her three sons in Poland.

"Somewhere in Poland, across the Baltic Sea,
There was a mother, rocking her baby to sleep.
'Son, are you safe now? It's all my heart needs to know.
I love you forever in our house above the shore.'"
An excerpt of a song "Adrianek" from CD "Things on the Floor Can Wait". ​

*For Liliana's site with Songs and Lullabies for Children, click HERE.

I'm passionate about meaningful LULLABIES! Lyrics that create connection, curiosity, and teach positive lessons, while soothing a child to sleep. Another words, I am passionate about the early development of CREATIVITY and VIRTUES in children. —Liliana
*For Liliana's online literary journal, The Healing Poems, click HERE.
*Liliana Kohann (called by her family in Poland and childhood friends "LILA," pronounced "Leela").
In her creative writings, Liliana also previously used names Liliana Przewlocka (maiden name), or Liliana Overman. 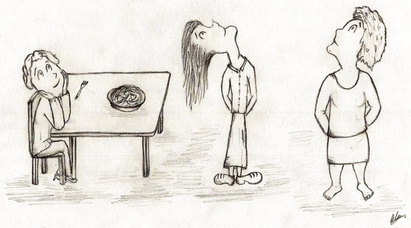