+1 615-429-4030  ArtpeacePublishing@gmail.com
Liliana Kohann
Creating With Every Compassionate Tear
HOW DID THIS POEM AND THEN A SONG COME TO LIFE.

Before I tell you how this song came to life, I'll share with you something that I often do. Ever since I was a young child, I was very creative and had a strong imagination. It certainly made my play time much more fun, but it also helped me endure hard times. Even today I use my imagination as a tool to grow, to understand myself, to master myself, and to heal. One of the things I do is ask myself: If my life NOW would be a painting, what would it look like? Then I close my eyes and go into a meditative state. Soon I see that painting very clearly. What AMAZES me, without me even thinking much about it, is that the painting has images that show me things that I wasn't even aware of. That painting illuminates for me what my inner world looks like.

In the year 2000 I also looked at that painting, and it looked very different from the one a year before. It was all fogged up, without much color, and on the right side there was a little tilted, brownish, almost dried flower. It looked as though the flower was disappearing, slowly moving out of the canvas.

It was also in the year 2000 that I got an unexpected call. One of the Oprah Winfrey's producers called me at my work and asked me to participate in one of Oprah’s upcoming shows called, "The Courage to be a Single Mother." This offer scared me because I was hiding from the world the fact that I had just gotten divorced. My ex-husband was still living in my house. Even my own parents didn't know. I was protecting the world from my own pain. Yet, as I was still being so strong for others—happy on the outside and especially strong for my three little boys—the little dying flower on the canvas was showing me that SOMETHING needed to change.

So, now back to the creation of this poem "With Every Compassionate Tear." I wrote these words in my journal (which later I re-wrote as a poem and a song) when I was a guest on the Oprah Winfrey show.

I agreed to appear on this show as I thought that perhaps I'd give strength to other women and moms. Yet, when I got there, somehow I couldn't be my old strong self. On the contrary, I fell apart. My own pain became too poignant and so strong that I became weak and unable to fight the tears. I felt disconnected from everyone in the room including myself. I couldn't really talk. That disconnection and the pain inside terrified me to the point that  I didn't even want to be there. I felt terrified and embarrassed. All I could think about was that I wanted to run away and to disappear. I really started making plans of how I was going to get out of there.

At that moment, something special happened. Totally unexpectedly, Oprah grabbed my hand, and she held it quite strongly. She kept talking to the other guests while holding my hand. 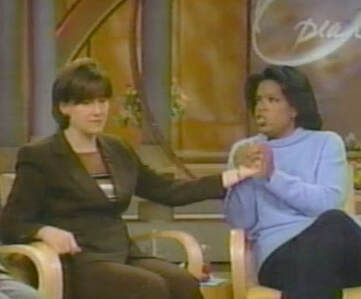 There are only a few times in my life that someone held my hand so strongly. I looked at the audience, and I was so overwhelmed by the compassion I saw in those women's eyes. Between Oprah holding my hand and that loving compassion of the audience, something started shifting in me. I started feeling my own presence coming back. It was like someone suddenly gave me permission to FEEL my pain and the PERMISSION to be weak. I had to accept that I wouldn’t be a "giver" at this time. I knew that I would probably look pathetic because once I'd start crying, I wouldn’t be able to stop. I wouldn’t be able to speak clearly and this was especially terrifying because English is my 3rd language. Yet, somehow at the same time, I started feeling this new strength within me. The compassion of these women lifted me up.

Suddenly my canvas appeared in front of me. I saw little drops of compassionate tears falling on the little flower, and the little flower slowly started lifting itself up. As my own tears kept rolling down my face, I realized that these tears that were for the first time compassionate toward myself. These TEARS also reflected compassion for all the other single mothers and children of abusive or neglectful parents. I felt huge gratitude for Oprah and especially for all the women there. The words kept flowing in my head, and later I grabbed a pen and started writing. "With every compassionate tear falling down, a little flower grows..." I also kept hearing a beautiful melody in my head. Eventually, I put the words from my journal and the music together. I eventually added this song to my CD Things on the Floor Can Wait, For Mothers, Their Babies and All Who Love Them. Even though it is not really a song for children, I wanted to share my message of compassion with mothers and parents.
​—Liliana (August 29, 2013)

​"With every compassionate tear falling down, a little flower grows..."

You can read the poem HERE.